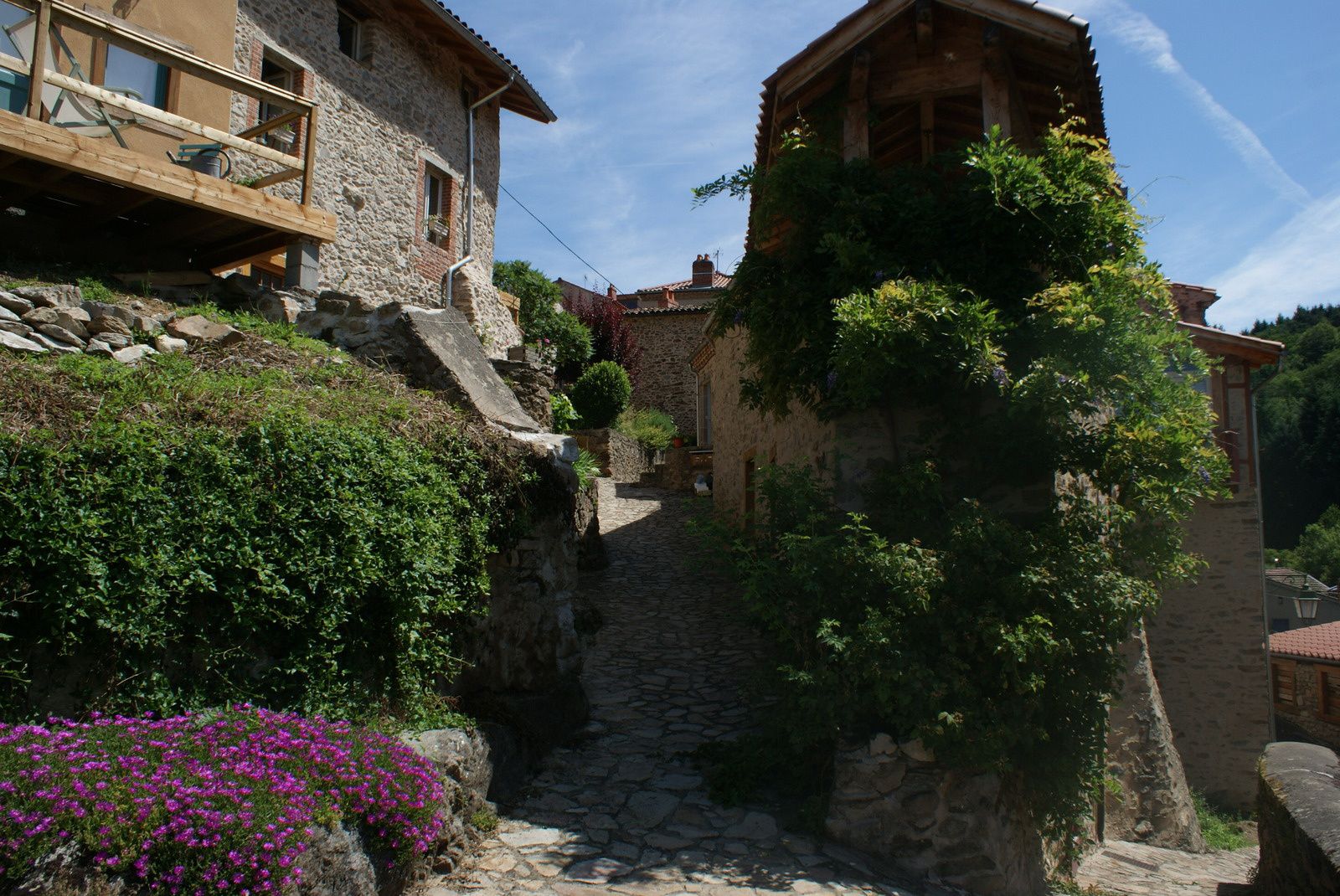 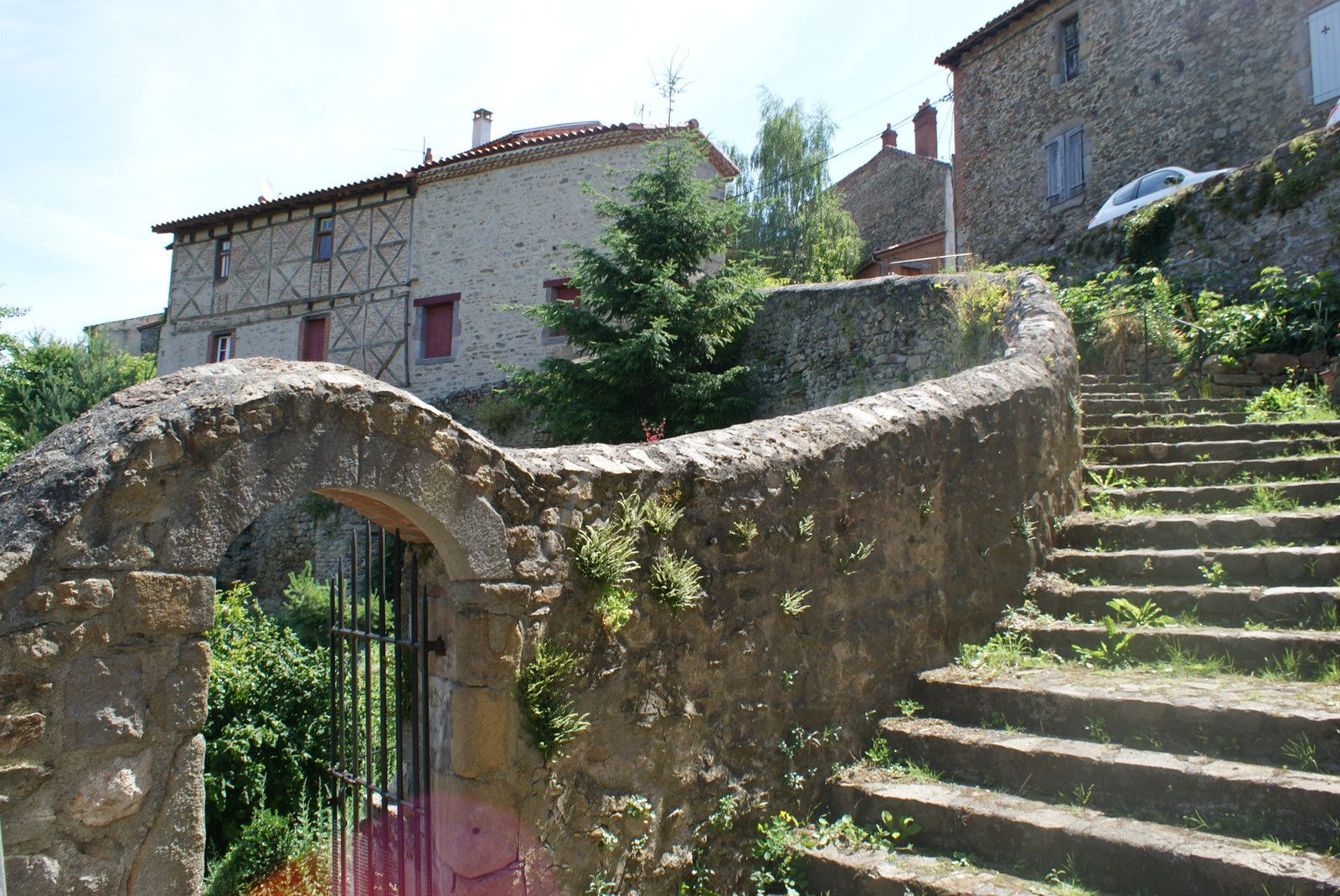 Auzon, soon ranked among the Plus Beaux Villages de France?

Auzon is located in the department of Haute-Loire, 15 km north of Brioude and halfway between Le Puy en Velay (70 km) and Clermont-Ferrand (70 km).

When seeing pictures of Auzon you might think that this picturesque medieval town is ranked among the Most Beautiful Villages in France?

Well, not yet, but Auzon is competing to obtain the ranking!

The old town is located on a 441m high rocky promontory situated near the Allier River, and overlooks the Auzon and Gaudarel Valleys.

Stroll along its ancient lanes, some of which are still cobbled, and enjoy stunning views of the lower village that unfolds along the Auzon River.

Saint-Laurent Collegiate Church, the castle, the Halle (covered market) and Saint-Michel Chapel are located in the upper town and you will find the medieval gateway Porte Brugelet farther below.

The Benedictine Collegiate Saint-Laurent was built at the apogee of the Auvergne Romanesque style architecture.

It has a south porch locally called ganivelle.

The Collegiate was classified as a Historical Monument in 1906.

Hiking enthusiasts will also be delighted as Auzon lies at the center of a set of marked trails organized around different themes.

Finally the nearby river Allier offers peaceful and quiet enclaves where anglers can devote themselves to their hobby.

A few historical facts about Auzon

A Gallo-Roman inscription found in the wall of the church may suggest the presence of an ancient settlement on the hill.

However, no other document nor discovery support this theory.

The first official reference to Castrum Auzon (feudal motte) is found in a charter of the Cartulaire de Sauxillanges dating from the late 10th century.

Other texts from the early 11th century attest to the presence of a Viguerie of Auzon (medieval administrative court) founded at the same time than the castle to serve the inhabitants of the area.

The lords of Bompar seem to have been the first lords of Auzon, a lordship they shared with the powerful Counts of Auvergne, Lords of Bourbon.

This explains why the castle of Auzon is known as Château Bourbon.

In 1211 King Philippe-Auguste confiscated much of the property of the Counts of Auvergne, and Auzon passed into the royal domain.

By the end of the 13th century, the former castrum had become a thriving village which in 1260 was granted a charter of franchise.

The bourgeois of Auzon could thus administer themselves.

Most of the structure of the stunning covered market or Halle, which is a classified Historical Monument, dates from this period.

The lordship of Auzon passed to the Montmorin family in the late 13th century.

The rampart of the old castrum was partially rebuilt in the 15th century to protect the village from the attacks of the Routiers.

The northern side of Auzon was defended by the castle and the wall, but its southern side overlooking the plain was vulnerable.

A wall was thus built.

Defended by several towers, it was pierced by a fortified gate named after the nearby district Le Brugelet.

The Porte Brugelet was classified as a Historical Monument in 1997.

Once fortified, Auzon enjoyed rapid economic recovery as in 1410 it was granted the right to hold a market and fair.

Auzon lost its status of ‘royal city’ in 1557, when François de Montmorin bought the Château Bourbon and the royal land attached to it.

At the end of the 16th century, the lordship of Auzon passed to the family of Polignac by marriage.

The Château Bourbon was left to fall in ruins and was converted into a stone quarry, and in 1639 the Polignac founded a Benedictine monastery on its site.

The ruined castle was fortunately restored and is now listed as a Historical Monument.

Auzon, a thriving town at the heart of a coal basin

The village of Auzon overlooks a lush green countryside.

Yet, this region is located on a coal deposit known as Bassin de Brassac, a vast coalfield exploited since the late 15th century.

This mining and industrial area saw the opening of several coal mines and glass-works factories as well as an important brickyard in the nearby town of Chappes.

This industrial wealth translated into a significant increase in the population during the 18th century.

The proliferation of mines and related industries fully developed with the construction of the railway in 1855.

Demographic expansion kept growing despite the fluctuations due to various epidemics, and by 1896 Auzon boasted some 1600 inhabitants!

It was at that time that the traditional figure of the ‘worker-peasant of Auzon’ appeared.

After completing his work at the mine, he would return home to care for his small family estate.

Imagine the hills surrounding Auzon fully cleared; the south and south-west facing slopes planted with vineyards, and the others with gardens, orchards and meadows.

On the downside, the arsenopyrite metallurgical plant built in the early 20th century in the plain created pollution related issues due to the presence of arsenic in the ore processing.

The depopulation that followed these tragic years led Auzon into a long period of decline.

The industrial and demographic growth of the 19th century resulted in the construction of a much needed bridge to facilitate the circulation of the inhabitants of Auzon.

A much needed bridge

Auzon is located on the right bank of the river Allier, and since the Middle Ages workers and villagers used two small ferries to cross the river to go to work in Chappes and other industrial sites of the left bank.

The construction of the bridge was decided in 1826 when one of the ferries overturned on a market day causing the drowning of a dozen people.

The first suspended bridge opened to traffic in 1845 but was destroyed by a flood of the river Allier the following year.

Today Auzon invests in tourism by combining nature and heritage.

This magnificent medieval town is part of the Cities of Art and History – Villes d’Art et d’Histoire.

We hope it will be soon ranked among the Plus Villages de France, a title that would be more than deserved!

It lies in the Monts du Livradois, a protected area spreading over the Puy de Dôme and the Haute-Loire departments and listed on the inventory of the ZNIEFF or Zone Naturelle d’Intérêt Ecologique, Faunistique et Floristique (Natural area of ecological interest, flora and fauna).

When in Auzon I strongly recommend you visit its Ecomusée -Eco-museum housed in the vaulted cellars of the Mairie (town hall) on Place de la Collégiale.

You will enjoy eight exhibition rooms fully dedicated to the history of mining, wine-growing, curtain fitments industry, schooling, ancients toys, the blacksmith and his forge, the shoemaker and his workshop, regional mineralogy and of course the genealogy of the Lords of Auzon.

Auzon is a Must Visit when in Auvergne!

Credits: article and photos are © Jean Piludu alias Papou Poustache – Article translated in English and edited by and for travelfranceonline.com