Here is an article on the collegiale directed by travelfranceonline

Dominique administrative Thanks to the site for its collaboration.

This page was updated on: Tuesday, November 10, 2015 at: 12:56 pm
http://www.travelfranceonline.com/collegiale-saint-laurent-dauzon-restoration-appeal/

Why an Appeal for the Collegiale Saint-Laurent d’Auzon?

The Collegiate and the walled town

Auzon is located in the department of Haute-Loire in Auvergne.

The origins of this beautiful walled town, perched on a rocky spur, date back to the pre-Celtic period.

Inhabited without interruption since those remote times, Auzon boasts an exceptionalarchitectural and religious heritage, which includes a wealth of fortified features such as beautifully restored ramparts and gates, and a Benedictine collegiate church.

Auzon is known worldwide for a whalebone casket, known variously as Coffret d’Auzon – Franks Casket – Auzon Runic Casket, which would have once belonged to the collegiate church.

This reliquary, made in Northumbria around 700AD, is now exhibited in the British Museum (except for a panel kept at the National Museum of the Bargello in Florence).

This valuable item was stolen (or more probably hidden) during the FrenchRevolution.

It seems to have changed owners several times, until Augustus Wollaston Franks, the curator at the Department of Antiquities at the British Museum, purchased it during the 19th century.

The 12th century Collegiale Saint-Laurent d’Auzon is considered a gem of Auvergne Romanesque architecture and attracts thousands of visitors each year.

Listed as a historical monument since 1906, it will be soon undergoing urgent and necessary restoration work focusing on the exterior, namely the roof, stones and sculptures and the bell tower.

The total cost is estimated at € 950,000, of which 86% will be subsidized by the Direction Régionale des Affaires Culturelles, the region, the department and the town of Auzon.

This contribution by the town leaves no spare funds for the restoration of the stained glass windows, the south porch and other minor expenses.

A joint Appeal by the Fondation du Patrimoine, the localAssociation du Vieux Auzon and Auzon town hall will therefore be launched to raise the additional funds.

A brief history of the Collegiale Saint-Laurent d’Auzon

The origin of the Chapter and the foundation of the Collegiale Saint-Laurent d’Auzon are unknown.

It seems that a first monastic community settled down in the castrum of Auzon during the High Middle-Ages.

A fragment of a Latin inscription discovered on one of the church walls dates, probably, from this period.

On the day of his death, December 20, 1091, Bernard of Auzon gave the tithe of all his lands to the abbey of La Chaise-Dieu.

This donation triggered much conflict between the local lords and the diocese, and delayed the construction of the monastery.

The Church of Saint Laurent d’Auzon, a dependent of La Chaise-Dieu, was upgraded to a collegiate in the early 13th century when the monastery was eventually founded.

It seems that the monastery, a renownedcultural and intellectual center of the time, depended initially from the Chapter of Saint-Julien de Brioude; this would explain somearchitectural similarities between the two churches.

The Collegiale Saint-Laurent d’Auzon has fortunately retained most of its outstanding original architectural features and is renowned for its remarkable acoustics.

Built on a very basic floor-plan, it consists of a single nave with four bays, a vaulted choir, a polygonal-shaped apse and two Gothic chapels decorated with murals.

The south porch is adorned with superb capitals carved with animal heads, mottoes and scenes of the Annunciation and the Nativity.

Its structure is based on an assembly of wooden slats, an architectural feature known as ganivelle, which makes it looks similar to the porch of Saint-Julien de Brioude Church.

The main porch’s doors are still partially covered in leather and trimmed with iron work, and the bell tower is known for its beautiful twin bays and its bell cast in 1569.

The funds raised by the Appeal will contribute to the safeguard of the exceptional architectural and artistic heritage of the Collegiale Saint-Laurent d’Auzon.

A link to the Appeal website will be posted shortly. 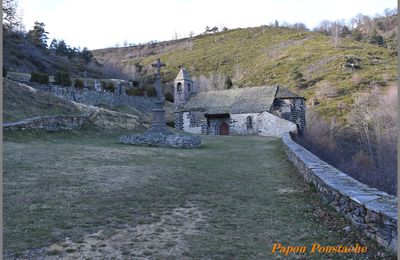