Montpeyroux, citadel of the Counts of Auvergne

The village of Montpeyroux is located in the department of Puy de Dôme, halfway between Clermont-Ferrand and Issoire.

Perched on a hill, it boasts splendid views over the valley of the Allier and has been ranked among the most beautiful villages in France (Plus Beaux Villages de France) since 1989.

Montpeyroux is a fortified village that was once the property of the prestigious lords of La Tour d’Auvergne.

Excavations show that the original village developed around the 6th century on the river bank on the site of the current village of Coudes.

The citadel of Montpeyroux was built in the 11th century on a rocky hill known as mont pierreux – stony hill.

Montpeyroux not only commanded the Limagne Plain but was also along a north-south communication axis known as Chemin Français.

Five watchtowers and sections of the covered way are still visible on the northern section of the ovoid rampart.

The centerpiece of these ramparts is the 14th century fortified belfry-gateway situated on the northeast side and classified as a Historical Monument in 1951.

The southern part of the citadel was not fortified as it ended directly above the steep cliff.

The southeast side and the castle were protected by the imposing Donjon of Montpeyroux.

Built in the second half of the 12th century, it is a perfect illustration of the military architecture introduced by Philippe-Auguste, namely a large round tower in the center of a fortress.

The keep was used as a dwelling house for the Lord but also for storage and defense when needed.

The village developed around it and was protected by a second wall.

The Donjon of Montpeyroux is a 30m high crenellated round tower with a diameter of 14.25m at the base and 13.20m on its upper platform.

It boasts 360° views and didn’t only defend Montpeyroux but also the surrounding villages.

It commanded the Allier Valley towards Issoire to the south, the Chaîne des Puys to the west and northwest, and the village of Coudes on the river bank.

The Donjon of Montpeyroux is one of the oldest in France.

It was classified as a Historical Monument in 1957.

Quarries of arkose of Montpeyroux

The name Montpeyroux is the evolution of mont pierreux-stony mountain.

The walled village was built on top of a deposit of arkose stones.

The arkose is a golden sandstone that can sometimes be grey or even slightly red.

It is a hard stone containing quartz and at least 25% feldspar.

The stonemasons of Montpeyroux extracted the golden arkose from the open air quarries located at the entrance of the village throughout the Middle Ages.

Sadly only 6 arkose quarries were still in business in Auvergne at the dawn of WWI.

The golden arkose of Montpeyroux was used throughout the Middle Ages for the construction of the large Romanesque churches of Auvergne such St Austremoine d’Issoire ou Notre Dame du Port à Clermont Ferrand.

Arkose was later used exclusively in the manufacture of millstones.

The operation of the quarries of arkose of Montpeyroux ceased in 1935.

The Church and village of Montpeyroux

The church of Montpeyroux was built in the 1840s when the parish was founded.

It was of course built with arkose stones.

The Romanesque basilica is a typical Auvergne pilgrimage church as it has a vast ambulatory that allowed crowds to move safely.

The vault of the nave is supported by two monolithic columns with capitals, all different, that were carved by the village’s stonemasons.

Montpeyroux enjoyed a thriving wine-growing industry during the 19th century.

However, this prosperity dwindled with the arrival of phylloxera that destroyed the French vineyard in the last decades of that same century.

This was followed by the depopulation that resulted from WWI.

By the end of the war only 180 inhabitants were left in Montpeyroux!

The revival of the village occurred in 1960 at the instigation of the architect Pérol and the prefect Perony.

The consecration of this revival took place in 1989 when Montpeyroux was ranked among France’s most beautiful villages – Plus Beaux Villages de France – thanks to the initiative of the mayor Mr Simon.

Of its wine-growing era Montpeyroux has retained picturesque stone dwellings along the lanes and around the donjon.

These typical winegrowers dwellings were built above a cellar located on the ground floor and were accessed by an outside stone staircase.

Montpeyroux has also retained elegant town houses located mostly at the entrance of the village.

The icing on the cake is that a young farmer has apparently replanted some of the vineyard of Montpeyroux and started the production of local wine.

Montpeyroux is a superb tourist destination, a Must Visit when in Auvergne! 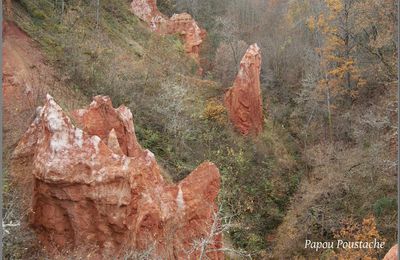